The Agricultural Credit Policy Council (ACPC) partnered with Department of Agriculture Regional Field Offices 7, 9 and 12 in organizing and conducting Ugnayang Agri-Kredit sa Probinsya Seminars for farmers, fisherfolk and other agri-fishery stakeholders in the three (3) regions. The 3 seminars were held respectively in Zamboanga City, Dumaguete City and General Santos City in March 2014.

The seminars were conducted to: 1) create awareness about DA and ACPC agri-credit policies and programs, as well as about the agri-financing programs of other institutions; 2) generate feedback on the credit policies and programs from seminar participants based on the presentations; and 3) inform participants of risk-mitigating mechanisms available to them such as the Agricultural Guarantee Fund Pool (AGFP). 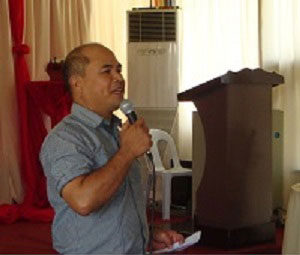 DA-RFO 9 Marketing Assistance Div. Chief and Regional Agricultural Credit Desk Officer Ferdinand D. Gamorot spearheading the holding of the Ugnayang Agri-Credit Seminar for Zamboanga City on March 11, 2014 at Tetuan, Zamboanga City. In his messagwe, he emphasized the need to inform the public of the credit services being extended by the government to the agriculture and fishery sector.

The two-day Agri-Credit Ugnayan with Stakeholders was conducted in Dumaguete City on March 13-14, 2014.  The activity was spearheaded by the DA-RFO 7, through Ms Ligaya Ebarita, Officer-in-Charge of the Agribusiness Investment and Enterprise Development and Ms Marcelina Cabonelas of the Agricultural Production Coordinating Office (APCO) who coordinated the activity with the various farmers and fisherfolk organizations and local government units in Negros Oriental.

The ACPC Programs and AGFP Forum in General Santos City on March 25, 2014 was spearheaded by the DA-RFO XII, through Ms Baidido T. Samama, AMAD Chief, who coordinated the activity with the various farmers and fisherfolk organizations and local government units in Region XII.

Credit matching sessions were also conducted for the participants. One of the results of the matching activity in Zamboanga was the linking of one participant with the DA’s Philippine Rural Development Program (PRDP). The seminar participant plans to develop a 2,000 ha banana plantation in Zamboanga City to cater  to the Middle East export market.

In Region XII, a group of agri- and community-based micro and small producers in Region XII that needs financing for small farmers who are producing raw materials for export products was endorsed to the ACPC’s AMP through the KPS-SEED, Inc, one of the MFI-partners of PCFC in the region. AGFP Executive Director Dick Pajarillo, on the other hand said that the AGFP would guarantee the loan availments of the group of micro and small producers.

In Zamboanga City, participants said that the forum was a success as those who attended were enlightened on the financial support being made available by the national government.

The participants in General Santos City, on the other hand, were also thankful for the information given to them on the various credit assistance of the government that could help them uplift their lives.

The participants in Dumaguete City also suggested continuous conduct of information dissemination on these programs of the government.