“With the benefits I get from the coop, I am now able to provide better for my family,” said the 27-year old farmer who is married and has two kids under four years old.

Prior to his membership at the cooperative, Albert, who hails from Matalam, Cotabato, recalled the struggles he used to bear from borrowing from traders to finance his two-hectare rice farm.

“I would borrow P10,000 with 10% monthly interest at four months to pay,” narrated Albert. As part of their agreement, traders would even take possession of his produce whenever he was unable to pay his loan, he added.

“You’re supposed to profit from all your hard work, but it felt like all the income just goes to the lenders,” lamented Albert, who actually graduated as an automotive mechanic but chose to pursue farming – a livelihood he began to engaged in since he was 15 years old.

Albert admitted he was trapped from the futile cycle for many years as he just did not know of other financing options he could turn to and that it has become the way of life for him back then. That was until a friend, who was also a farmer, shared with him about a cooperative nearby that helps small farmers like them.

“I was determined to save P2,250 for the membership fee and finally avail of their services,” said Albert.

Albert has been a member of the Taculen Farmers’ MPC for more than two years and he claims that earnings from his in-bred rice activity has certainly increased.

In July 2017, through the coop, Albert was able to avail P50,000 under the Production Loan Easy Access (PLEA), a loan facility designed to finance production of crops, poultry, livestock and fisheries of small farmers and fisherfolk. PLEA is being implemented by the Agricultural Credit Policy Council (ACPC), an attached agency of the Department of Agriculture (DA).

Under the PLEA, the ACPC taps lending conduits such as the Taculen Farmers’ MPC to extend non-collateralized loans to marginal and small farmers and fisherfolk at 6% per annum.

“I used the P35,000 to buy chemicals and fertilizers while the remaining P15,000 was spent for labor and land preparation costs,” explained Albert.

Albert’s two-hectare land usually produces about 120 sacks of rice per cropping or 240 sacks annually. He keeps about 50 sacks for his family’s consumption while selling the 70 at about P1,150 to P1,200 per sack or P19 per kilo.

“I was able to pay my loan in six months because its 6% interest rate was very affordable,” Albert narrated. “I immediately pay after every harvest, even before the deadline.”

Through the PLEA, the young farmer earned about P30,000 which helped him pay the tuition fee of her oldest daughter who is now in kindergarten. His profit even allowed him to contribute in paying off his parents’ remaining debts, which coincidentally were from “5-6” lending.

“I now have financial freedom. I don’t have to worry providing food for my family,” said Albert whose wife stays at home to take care of their kids while also helping him tend their farm when she can. “When we get sick, I can now draw money from my small savings.”

Aside from being a full time farmer, Albert also works as a sales clerk for the cooperative. Through this side job, he earns an additional P4,000 monthly. When his schedule permits, he also helps in tending the small corn and banana project of his mother.

Experiencing first-hand the benefits of being part of a cooperative, Albert vows to convince his family and friends to also join one.  “In times of need, I know I can count on the Taculen Farmers’ Cooperative,” said Albert. “It has been an indispensable partner for me and my family.” PLEA beneficiary Albert Pendijo of Matalam, Cotabato. Mr. Pendijo was able to avail himself of a P50,000 loan for his rice production under the PLEA through the Taculen Farmers’ Multi-Purpose Cooperative in Matalam, Cotabato.

Taculen Farmers’ MPC’s Chair, Vivien Dumingsel, shared that the more than four million loan fund under PLEA provided a big lift in the lives of their member-farmers.

“Their take-home pay increased because of the very low interest rate per annum,” said Chair Dumingsel.

“In fact, the repayment rate of the PLEA in our coop registered at 100%,” reported Ms. Dumingsel.  Aside from the low interest, no collateral requirement, and free insurance coverage under the PLEA, the Chair credits the remarkable feat to the coop’s careful screening of members and to the orientation given to the borrowers before loan releases.

“We urge our members to pay on time so that they can re-avail of loans for their farms. Plus, their promissory notes are notarized so they will be legally liable if they do not fulfil their obligation,” said Dumingsel.

“I thank the ACPC for entrusting to us the credit fund and for making us as one their partners here in Cotabato,” said Dumingsel. “The field-based focal person assigned to us was also a huge help for us to comply all the requirements needed to implement the program.”

The Taculen Farmers’ MPC, according to Ms. Dumingsel, started with only 24 members which increased to 97 members to date. These members are all either rice or corn farmers. From one barangay, the cooperative has expanded their operations and is now serving the whole municipality.

“Our cooperative is a service-oriented cooperative. It exists not just for the officers but for the benefit of all its members and even the community,” said Dumingsel, who is now on her 6th year as coop Chair.

“Aside from lending services, we also sell affordable fertilizers and chemicals to our members and allow them to use our farming equipment at minimal rates,” added Dumingsel. “We also give management and bookkeeping trainings to our members and also provide death assistance benefit which extends to their immediate relatives.”

She added that the coop also provides scholarship to deserving students and donates chemicals used in cleaning the community.

Ms. Dumingsel takes pride on how far the cooperative has come but assured they will not rest on their laurels. “I always tell our members to love and to help our cooperative”, said Ms. Dumingsel. “This cooperative is ours.” 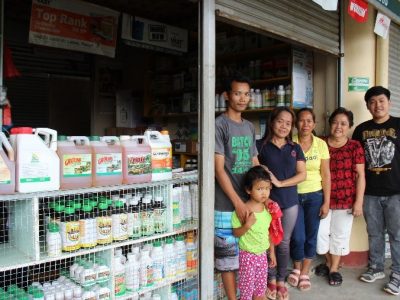 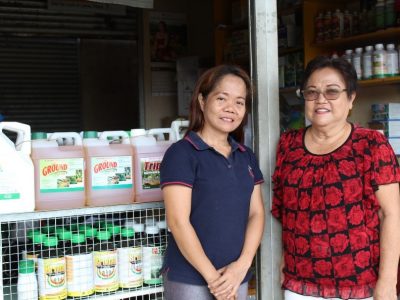 (From left) Current Chair Vivien Dumingsel and former Chair Rebecca Dumingsel of the Taculen Farmers’ MPC in Matalam, Cotabato. The coop is one of the lending conduits of the DA-ACPC PLEA with a P4.262 million approved loan allocation benefitting 97 small farmers. 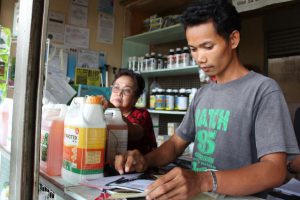