The Department of Agriculture (DA) through the Agricultural Credit Policy Council (ACPC) turned-over P20 million to the Bangko San Luis which will serve as the lending conduit partner of ACPC for the Survival and Recovery (SURE) Assistance Program.

The SURE Assistance Program is a post-disaster facility which provides loan assistance to calamity-affected small farmers and fisherfolk and their households through partner-financial institutions and lending conduits. It caters to small farmers and fishers whose livelihoods had been affected by calamities. Interest-free loans of not more than P25,000 per borrower are provided to eligible borrowers to finance the requirements of rehabilitating their farming and/or fishing or livelihood activities.

President Duterte also released an initial amount of P29 million to poultry raisers from San Luis, Pampanga and San Isidro and Jaen, Nueva Ecija as compensation for the more than 600,000 chickens, ducks and quails that were culled as part of the clean-up operations.

The initial amount released was the first payment of the total of P43.31 million which the DA vowed to release to all affected farmers whose fowls were culled in the anti-bird flu operations.

In the same forum, President Duterte proved that it is safe to eat chicken and other poultry products by joining in the “boodle fight”.

The President also awarded the staff of Department of Health (DOH), the Department of Social Welfare and Development (DSWD), the Bureau of Fire Protection (BFP), the Philippine National Police (PNP) and the Armed Forces of the Philippines (AFP) who have assisted in the culling operations and quarantine in Pampanga and Nueva Ecija.

President Rodrigo Roa Duterte together with the Agriculture Secretary Emmanuel F. Piñol handed over the checks to poultry raisers and workers from San Luis, Pampanga affected by the Avian Influenza Virus (AIV) during the forum “Sama-Sama, Tulong-Tulong sa Pagbangon at Pagsulong” at Heroes’ Hall in San Fernando, Pampanga on August 28, 2017.

Department of Agriculture (DA) Secretary Emmanuel F. Piñol said that the cooperation of government agencies, industry stakeholders and the public at large helped in containing the spread of the Avian Influenza Virus (AIV). Through Sec. Piñol’s efforts, poultry raisers and workers in San Luis, Pampanga will be able to avail themselves of financial assistance through the DA-ACPC Survival and Recovery (SURE) Assistance Program being implemented by the ACPC. 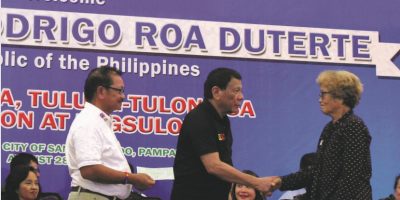 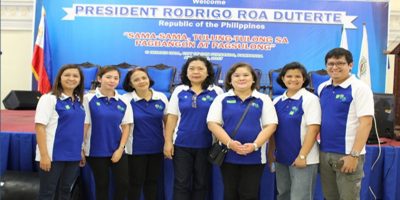 The ACPC led by Executive Director Jocelyn Alma R. Badiola (5th from left) were among those witnessed the handing over of checks to poultry raisers and workers from San Luis, Pampanga