After its launching in Malimono, Surigao del Norte on June 23, 2017, the Agricultural Credit Policy Council’s (ACPC) Production Loan Easy Access (PLEA) program continues to expand and is currently being implemented in 49 areas nationwide.

PLEA is a special credit facility designed to address the financial needs of marginal and small farmers and fisherfolk for a fast, convenient and affordable credit. Non-collateralized loans for agri-fishery production will be provided under the PLEA through cooperative banks, cooperatives and non-government organizations (NGOs) as credit delivery channels. The loan is payable from two to 10 years with an interest rate of 6% per annum.

Aid for Siquijor farmers and fishers

The Province of Siquijor, the third smallest province of the country in population and land area, was included by Secretary Emmanuel Piñol in the PLEA coverage areas during his Biyaheng Bukid in the province last June 2017.  Secretary Piñol challenged the local officials of the province to draft a Provincial Agriculture and Fisheries (PAF) Road Map to set the direction for the development of the potentials of the province in food, fisheries and aquaculture to reduce the province’s poverty level from 55% to only 25% by the end of the term of President Duterte.

The province of Bukidnon is one of the initial coverage areas of the PLEA Program due to its high poverty incidence and difficulty of farmers and fisherfolk in accessing financial assistance.

In his speech during the ceremonial check turn-over, Bukidnon Provincial Agriculturalist Alson G. Quimba expressed his outmost gratitude to the DA as the program will improve the lives of the beneficiaries and in turn will contribute in improving the economy.

LUFAMPCO Manager Thelma Aguilar said that in their 20 years of operation, it is only through the PLEA program that they were able to partner with the DA. It is an opportunity for them to help the government reach more farmers and fisherfolk who are in dire need of financial assistance.

Mr. Jose Mulat, 67, one of the borrowers of PLEA Program and member of MCCB said that, at first, he did not believe about the program and expects that the loan requirement would be tedious especially in terms of collateral, documentary requirements and high interest rate. However, the PLEA Program does not require collateral and the interest rate is only 6%. He added that, borrowers can freely choose their schedule of payment so it will not be burdensome for them.

The ACPC, in partnership with the Philippine Carabao Center (PCC), provided an initial P4.5 million funds through the PLEA program to dairy buffalo raisers in Nueva Ecija to address their financing needs.

About 115 dairy farmers will benefit from the said loan funds which may be used for purchasing equipment for their dairy production and processing. Each dairy farmer can borrow up to P50,000.

Dr. Liza Battad, Planning and Special Project Chief of PCC, said that relevant support mechanisms for dairy farmers should be made along the areas of production, assembly and consolidation, processing and marketing. The PCC-ACPC project shall adopt a ‘responsible financing’ scheme wherein financing shall be given to existing dairy buffalo raisers who have good track record of performance across the value chain.

The project aims to save dairy carabao genetics, encourage feed and other production services related enterprises, entice dairy buffalo product development and processing businesses and expand market reach of dairy buffalo products. A total of 1,853 dairy entrepreneurs along the dairy value chain will benefit from the project.

The loan disbursement was conducted on October 18, 2017 in San Jose City. The ACPC was represented by PLEA focal persons for Nueva Ecija, Ms. Filipinas Gerardo and Ms. Cherry Anne Acabal.

As ACPC’s lending conduit, the NSCC will facilitate the loan releases and collection of repayments under the PLEA program.  The NSCC will also provide the farmer borrowers assistance in completing the documents required in their loan applications particularly in the preparation of farm plans, loan proposals and other technical requirements.

According to DA Region I Regional Executive Director (RED) Lucrecio Alviar, the local garlic of Ilocos Region, known as the “White Gold of Ilocos”, has a sizeable share in all the garlic plantations in Northern Luzon which account for more than 4,000 tons with a yield of at least over two tons for one hectare.

“The Ilocos Region, where climate conditions and the type of soil are ideal is the country’s biggest producer of garlic with over 1,800 hectares of land in Ilocos Norte suitable for garlic farming, and more than 120 hectares in Ilocos Sur,” added RED Alviar.  RED Alviar also asserted his confidence that the garlic industry of Ilocos, though has been struggling due to importation and investments from neighbor countries, will bounce back sooner than hoped for.

“Saludo kami sa inyo dahil kayo ang nagpapakain sa aming lahat,” said Atty. Joycel R. Panlilio to the small farmers on behalf of DA Undersecretary for High Value Crops and Rural Credit Evelyn G. Laviña.  Atty. Panlilio emphasized that the P20 million loan release under the PLEA Program is but a portion of a P100 million fund approved by the DA for the PLEA progam in the Ilocos Region.

On November 16, 2017, during the 11th National Shrimp Congress in Bacolod City, P20 million was turned over to Negros Cooperative Bank under the PLEA program. Beneficiaries of the program are farmers of the CHICKS area covering the six municipalities of Candoni, Hinobaan, Ilog, Cauayan, Kabankalan, Sipalay. These municipalities are among the towns with high poverty and insurgency incidence according to the Secretary.

The DA Secretary and DA-ACPC officials proceeded to Miagao, Iloilo on Nov. 17, 2017 and turned over P40 million for Antique. This is the first tranche of the P300 million PLEA allocation for one of the poorest provinces of Western Visayas where farmers and fishermen are exploited by loan sharks. P20 million was turned over to Iloilo which is part of the Secretary’s P100 million commitment to finance the production of onion and garlic farmers in the Province of Iloilo and P50 million for Miagao.

The initial fund will benefit around 1,600 farmers/fisherfolk in the three provinces. 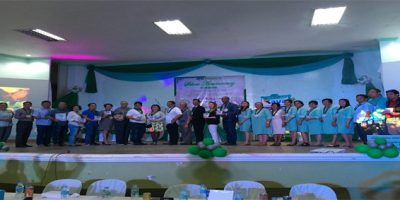 ACPC’S Director Ma. Cristina Lopez (5th from left) leads the turnover of credit funds under the PLEA Program to the PAGLAUM Multi-Purpose Cooperative in Siquijor 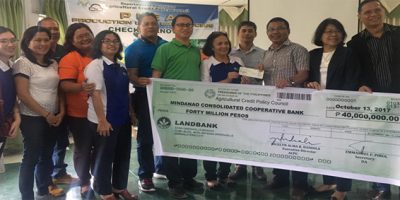 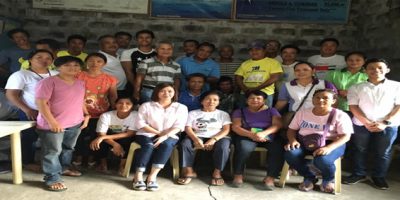