Heavy rains and winds brought about by Typhoon Nina wreaked havoc in Bicol just right after Christmas day in 2016. Due to the severity of damage, the local governments of Catanduanes and Camarines Sur declared a state of calamity. Aside from Bicol, tropical cyclone warning signals were also hoisted over numerous provinces in CALABARZON, MIMAROPA, Central Luzon, Western, Eastern, and Central Visayas.

When it finally stormed out of the Philippine Area of Responsibility, Typhoon Nina left behind massive damages to agriculture with estimated cost pegged at P4.1 billion, living up to its notoriety as the strongest typhoon to strike the Bicol Region in 10 years.

“Almost all of the rice fields were flooded including the land where I plant hybrid rice,” said Asuncion who, at 64 years old, tends a two-and-a-half-hectare land with the help of his husband. She describes herself as a farmer all her life, a legacy she may have passed on to seven out of her eight children who became farmers too.

On the other hand, 57-year-old Melinda described her ordeal as “frightening” simply because of the massive financial loss they had to bear from the damages. Melinda, who is a mother of 10, relies heavily and solely on the income from her harvests. Her fears were realized when the three hectares of hybrid rice she manages were engulfed with water.

“We’re still thankful our house was not destroyed,” recounted Melinda who added that her whole family had to settle eating banana and cassava to survive during the disaster.

The Philippines is hit by an average of 20 typhoons per year, with many of the storms causing significant damage to farms and fishing communities. Small farmers, like Asuncion and Melinda, are affected the most since they usually have to borrow money to plant crops in lands they only lease. They need to get back on their feet and on their fields to plant as soon as possible. Most importantly, calamity-affected farmers need to ensure that their basic needs such as food, clothing and medicine are covered. Hence, flooded rice fields is always tantamount to money down the drain for small farmers. Survival and Recovery (SURE) program beneficiary Asuncion Reales from Magarao, Camarines Sur said that she used the loan from the program to buy seeds and fertilizers so she can plant again after Typhoon Nina which destroyed her crops. 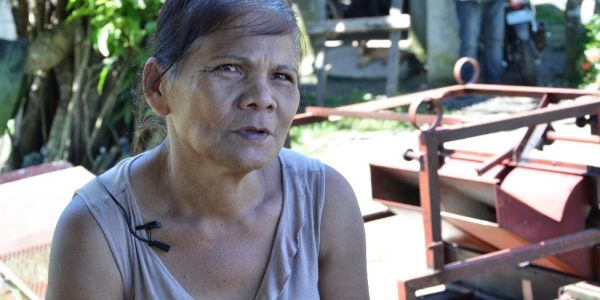 Melinda Imperial recounts her experiences during Typhoon Nina’s devastation in Magarao, Camarines Sur. Loans she availed through the SURE program helped her rehabilitate her farming activity.

Such are the challenges the Department of Agriculture, through the Agricultural Credit Policy Council (ACPC), aims to address when they launched the Survival and Recovery (SURE) Assistance Program, a quick-response, post-disaster support facility for calamity-affected small farmers and fishers.

“It aims to support the government’s goal of helping agricultural households in regain their capacity to earn a living; and to provide immediate relief through loan assistance,” explained DA Secretary Emmanuel F. Piñol.

Under the SURE Program, eligible borrowers will be provided an emergency loan worth P5,000 and recovery loan worth P20,000 at zero interest rate and up to 3 years to pay. The program focuses on areas “Under State of Calamity” with considerable damage to agriculture due to natural disasters.

As of March 2018, under the SURE program, the ACPC has released loans amounting to more than P85.72 million benefitting 4,015 small farmers and fishers through 15 lending conduits.

The ACPC approved almost P33 million loans for the Bicol Region after Typhoon Nina. For faster financial support delivery, the ACPC tapped the Magarao Multi-Purpose Cooperative (MPC) as one of its partner lending conduits in said region.

This is not the first time that the ACPC and the Magarao MPC partnered to uplift the lives of farmers in the Municipality of Magarao.

In 2015, the ACPC downloaded P2 million credit fund to the Magarao MPC under the Calamity Assistance Program, which recorded an almost 100% repayment rate from small farmer-borrowers. In 2016, the ACPC also provided P500,000 to the same as working capital loan for its rice processing center which was given as grant by the DA.

Asuncion and Melinda, who are both long-time members of the Magarao MPC, are two of the 83 beneficiaries of the SURE program in Magarao, Camarines Sur.

“I used the loan from the SURE program to buy seeds and fertilizers so I can plant again,” recalled Asuncion. “I now borrow from the coop twice a year, before every planting season.”

“Magarao MPC Manager Elmar Basbas reached out to me so I can avail loans under the SURE,” said Melinda who used the loan for her family’s immediate needs. “It was a big relief because I don’t need to pay any interest for the loan I received,” she added.

According to the women farmers, prior to being members of the MPC, they used to borrow production capital from traders who usually charge excessive interest rates.

“It’s like we were working for them. Nonetheless, we had no choice but to accept their terms because we didn’t even know if there will be someone who will lend us money after calamities,” said Melinda.

“I used to pay interest rates as high as 20% in six months to Chinese traders,” exclaimed Asuncion. “Sometimes, all money that is left for us are just enough to buy food.”

Magarao MPC Chair Estrella Bernardo expressed her gratitude to the ACPC for being one of its partners in extending assistance to small farmers in Magarao and nearby municipalities.

“With the financial assistance from ACPC, we were able to help our members start all over again after the devastation of Typhoon Nina,” Bernardo said. “The coop also assisted in other financial needs of the farmers.”

According to Manager Basbas, aside from loans, the cooperative also provides other benefits such as free training, insurance program, and death assistance support to their members.

“To further help in improving their lives, the Magarao MPC directly buys the harvest of our member-farmers at a reasonable price to ensure that their products will not be undervalued by abusive traders,” said Manager Basbas. Thus, Asuncion and Melinda do not have to market their harvests, which reach 200 to 300 sacks each, because there is always a sure and fair buyer.

Asuncion and Melinda both agree that Magarao MPC has been their refuge in times of need.  Though they remain as small farmers, it cannot be denied that both women farmers experienced improved productivity that led to improved lives when they engaged in formal lending through the cooperative.  Slowly but surely, both were able to build a simple yet concrete house for their families which can better withstand the next typhoons to come.

Amid the devastation, these women showed incredible resiliency to uphold their families – an incredible strength that everyone needs to be recognized, emulated and supported. Magarao Multi-Purpose Cooperative Manager Elmer Basbas and Chairperson Estrella Bernardo are grateful to ACPC for entrusting their organization to be a channel of blessing for small farmers in dire need of support.